Well, it's all in the suitcases. Slightly heavier than on the outward trip, but otherwise no real expansion. First job for the day was wash and vacuum the car then we hit the road towards Heathrow. Having time to kill we took a slight detour to Silchester Roman Village from the 1st century BC. Not a huge amount to see of the old village except for parts of the wall and gates, and the amphitheatre. 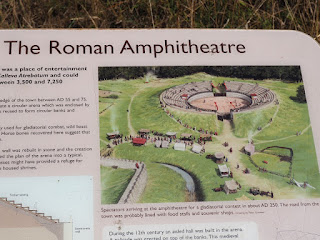 Had lunch at a pub along the road and easily found our way to the Park Inn Radisson near the airport. I booked this hotel because it was close to where we had to return the car and I figured we could walk back to the hotel after dropping the car. So, how close are we? Across the road! So easy. No dramas returning the car and now we are just marking time till we fly tomorrow night.
Posted by Lets Travel at 13:01 5 comments:

Another pile of rocks

Yesterday as we were travelling to Gilwern where we stayed last night, we kept seeing signs for Green Man. We had no idea what it was but only a few k from our destination we noticed a huge field absolutely covered in tents and vans - I reckon it was at least 3 times the size of the MCG. I googled Green Man when we got to the hotel and it is a 4 day music festival with at least 25,000 people attending. At least we didn't get caught up in the traffic the day it started and we were on the road this morning well before it finished.

Nothing else to report. Today we travelled to Amesbury from where we plan to visit Stonehenge in the morning. We arrived at our hotel to find that it is managed by an Aussie couple from Sydney. This is obviously a devious plan to get us ready for home.

Sometimes you get things very right. We bought our Stonehenge tickets online for a 10am entry. We headed there nice and early, driving past the pile of rocks on our way, where the traffic slowed as everybody had a good look. Parking at that time was easy and close to the visitor centre, no queues, and straight on the shuttle to the stones. There were a few tour buses already there but otherwise it was pretty quiet. But, by the time we were done at 11 there were a dozen buses and the car park was full.

As for the stones - pretty impressive, as well as the surrounding burial mounds. 4500 years old - imagine the manual labour required to get these stones there, and standing. 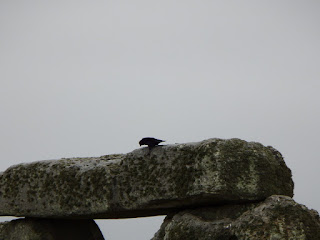 From there we headed to Salisbury to look at the cathedral - by this time the traffic was barely more than crawling along the road by the stones. Here again we finally got it right. A number of cities we have visited have a large park and ride set up and finally we decided to investigate rather than drive into the city and do the awful hunt for parking. Bonus - to park the car was free, and at the moment the bus is free. So easy!

Visited Salisbury cathedral which began construction in 1220. In the chapter house is one of four remaining copies of the Magna Carta. The print on this is so tiny - they had a translation there. The Magna Carta formed the basis for the American Bill of Rights. 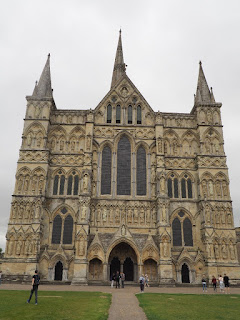 Lunch in Salisbury then back to the hotel to organise the suitcases.

Sadly it was time to leave our very comfortable hostel and begin to wind our way back towards Heathrow. We are starting to think seriously about repacking the cases and working out whether it will all go back in. We have offloaded a lot of the sauces and foody stuff to add to the kitchen supplies in the hostel. From here it is all hotels.

We planned just a straight drive to our hotel in Gilwern after doing the last laundry before we get home. It was nearly 12 by the time we were really on our way and not far along we came across a long queue of traffic after an accident on the road. With the help of Dora we managed to find a detour, along with lots of other cars in both directions. The detour was another of those one lane roads so lots of pulling over for cars, and tractors, coming the opposite way.

We passed through some towns with interesting names - Plwmp, Porthyrhyd, Llanwnnen, Rhydyrhaearn Farm, Cwrd-newydd and Bwlch. I'm not even going to try and say them. Maybe I'll take on a new challenge when I get home and learn Welsh.

We stopped for lunch in the town of Lampeter and blow me down if it wasn't the town where the Welsh Quilt Centre is located. What a fabulous exhibition! The quilts are all old Welsh quilts and owned by a lady called Jen Jones. She has had an exhibition every year for the last 10 years and apparently this will be the last as she is retiring at nearly 80. 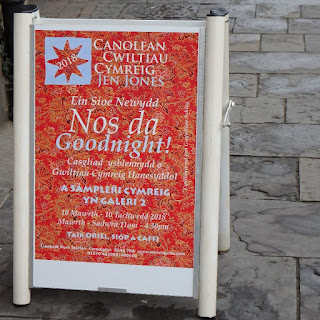 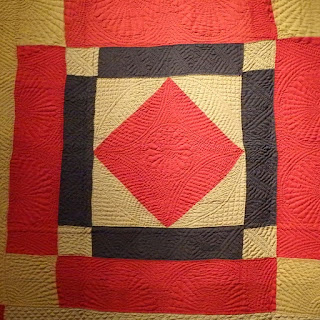 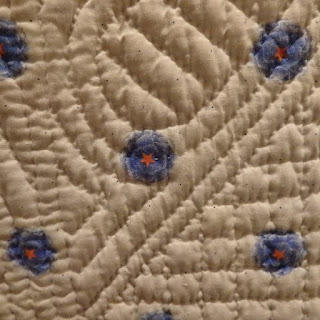 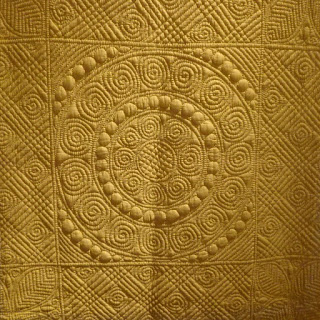 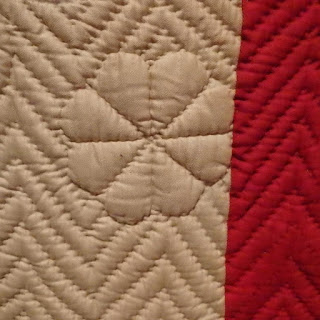 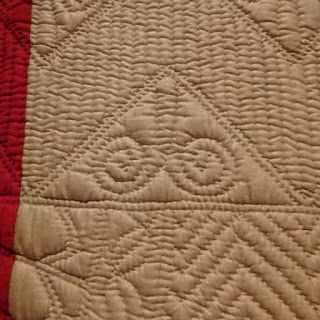 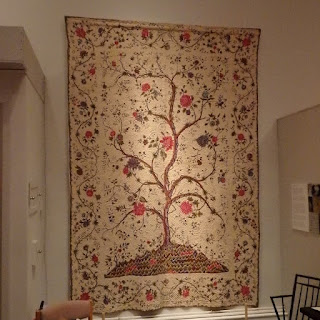 Right next door was a fabulous quilt shop - Calico Kate. Kate was a lovely lady and we had a chat about the Birmingham show and also quilting in Australia.  I would have liked to buy something typically Welsh but sadly they are selling the same stuff out of America that we see at home. Even though I didn't buy anything Kate gave me a little Lampeter teddy. I'll certainly remember this shop.
Posted by Lets Travel at 12:58 3 comments:

This city I can handle.

Ventured south today to the city of St Davids. St Davids is the United Kingdom's smallest city in terms of both size and population (1,841 in 2011). It is the final resting place of Saint David, Wales's patron saint. It really was small with only a few shops right in the centre and a few restaurants. The big attraction there is St Davids cathedral, another 12th century structure. This cathedral, while being of the same style as many others we have seen, is quite different inside, and probably a lot bigger than most. It is still in use today. One thing we did notice was that the internal ‘pillars' had a very definite ‘leaning tower of pisa' about them. The church guide wasn't sure if that had happened with the weight of the roof over time, or if it was the result of an earthquake in the 1200s. 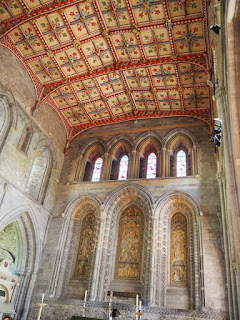 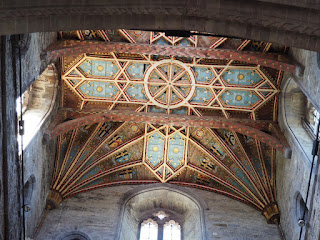 We drove back home following the coast and checking out the bays and beaches. There were some lovely spots, and more of those out of the way caravan parks. It was a nice day today with blue sky and sunshine but the temperature was only about 19deg. But it is summer, and school holidays, and the parking at the beaches (£3) was packed, and the kids were in swimming. Not this little black duck!

One of the towns along the road was Mwnt - pronounced 'moont' (oo as in book). There was a church here (but nothing else)  dating back to the 13th century. A lovely location with a caravan park on the cliffs and a beautiful beach and swimming bay down the cliff. There was also a small kiosk and a pay and display parking area. This place really seemed to be the middle of nowhere - is a parking officer really going to come here? 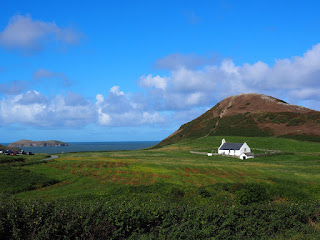 Another stop on the way home at the town of Fishguard where there is a tapestry (a la Bayeux tapestry) on display depicting the last invasion on English soil by the French in 1797. The tapestry was done and unveiled in 1997 to commemorate the bicentenary of the event. Pretty stunning tapestry and already under conservation conditions so hopefully will have a much better life than the Bayeux tapestry. 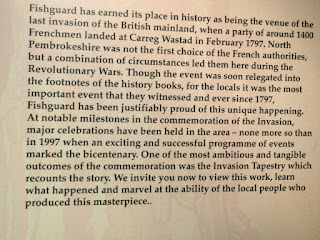 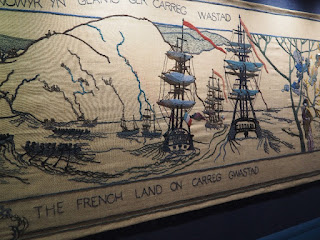 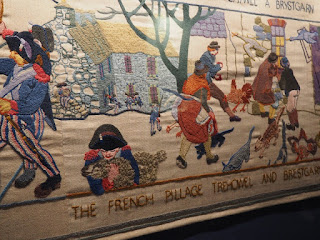 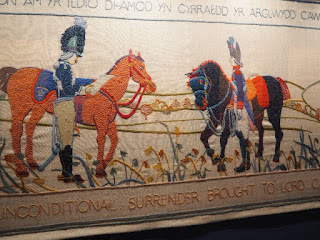 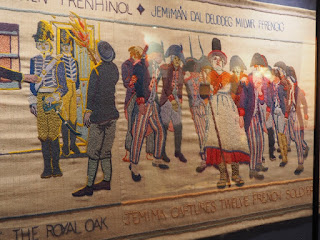 Total rest day today with just a short drive to a nearby town for lunch. We have really enjoyed our few days break here. The countryside is beautiful and the hostel we have stayed in is very comfortable and so well equipped and the owners are just lovely. Wish we could have stayed here right up to getting on the plane for home.

Before leaving this morning we had a short walk around the village where we stayed and looked at the old stone buildings. The house and outbuildings date back to the 1600s. Beautiful stone – not unlike bluestone.

We had a quiet drive today following a river valley along to the sea and then travelling south along the coast to a place just outside the village of Aberporth. Along the way we stopped at the town of Machynlleth to sort out some banking and have morning tea. A lovely village with mostly old style shops – a tour bus was stopped here, I'm guessing for the lovely shops.

Stopped in the town of Aberaeron for lunch. This town was right on the coast with a small port (local fishing boats) and a huge caravan park. The main street was buzzing with people and parking was at a premium. From there we moved further along the coast to Aberporth and our hostel for the next 4 nights. We are staying in the Piggery Poke Hostel. It is in a 500 year old farmhouse and really well equipped. We are the only ones here tonight so we have the run of the place.

A quiet day today with just a short drive to the nearby town of Cardigan. We took the scenic route to get there via a few seaside villages and lots of narrow one track roads. Lots of caravan ‘parks' in out of the way spots - I'm thinking they are just camping grounds in farmers paddocks with no real facilities but we didn't go in to check this. Somewhere there must be listings of all these out of the way places because there were lots of people camping there. 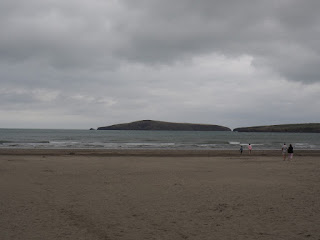 Near the town of Cardigan we visited St Dogmaels abbey - 12th century. It still amazes me to see just how old some of these places are and to see they are still standing in some form or another. Also visited Cilgerran castle nearby, built mostly in 1223. 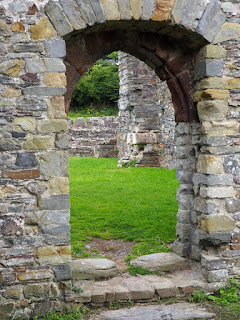 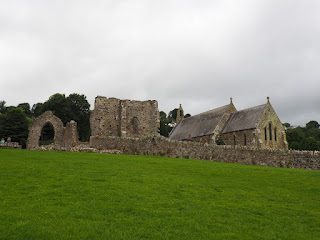 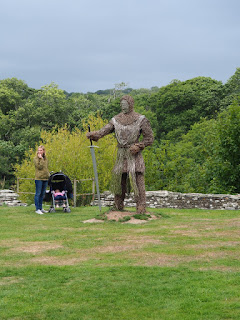 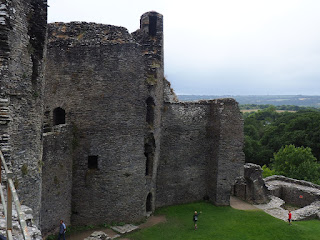